If you recall (the two of you who have read this since the beginning), at the end of last year, I made a few goals for myself. One thing that I wanted to accomplish was to do more yoga. I have struggled so much with yoga in the past, but it was something I really wanted to figure out how to enjoy.

That was my first mistake- trying to figure it out. But that’s how my brain works. I took a personality test a few months ago, and my result was “Logistician.” I’m the kind of person who scoffs at the internet memes posted by yogis on Facebook. You know- the ones with uplifting quotes on a background of a grassy field at sunrise with the perfect Instagram filter. I ask why…. a lot. If something is “good for you,” I need someone to give me the reason it’s good for me using citable fact. It’s obnoxious, I know. 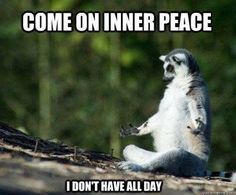 What I’ve realized is that most things take on a different meaning for everyone, and this is no different. And another thing- THAT’S OKAY! I really struggled with what I was supposed to be feeling when I practiced yoga. I had been occasionally practicing yoga in my apartment using a YouTube video as a guide, and maybe I would find it in myself to go to a class about every 6 months. I couldn’t get excited about it. I couldn’t get over my anxiety about being good at it or not. Then one day, something clicked when I went to a yoga class taught by a friend of mine after a night of battling insomnia. On that particular day, it offered a kind of focus and control that I needed to feel better. (You’d think I’d have figured out how to feel like a human on little sleep at this point, but I definitely haven’t.) That class, the sense of belonging and community that my friend offers to her students was a game changer for me. I was instantly hooked. I started going to class once a week, then twice a week, and now I catch a class as often as I can, and I crave it.

To be honest, it was a little bit surprising that I suddenly had this thing that I desired to put work into. I haven’t felt that way about anything in a really long time. It didn’t come without challenges, and it still doesn’t. I still bargain with myself every time I head to class. Sometimes, as I sit in a room before class begins and look around at the thin and athletic people there, I have the urge to bolt for the door. I am neither thin or athletic, and I never have been. But then I stay. Sometimes I’ll lay on my mat and close my eyes and remember that this time is about me and no one else. I’m reminded that I have a friend who teaches this stuff, and she thinks I’m awesome and have great form. Ha!

There are days my body doesn’t do the things I want it to. My hips lock up, my feet cramp, or I can’t fold over and grab my feet as comfortably as I could yesterday. I get frustrated because I’m the “Logistician,” and I just want things to work. It’s all part of the ride, and unlike most things in my life, I’m somehow okay with it when things don’t go the exact way I want them to. It’s all about how I respond to it, which is something I can take with me. 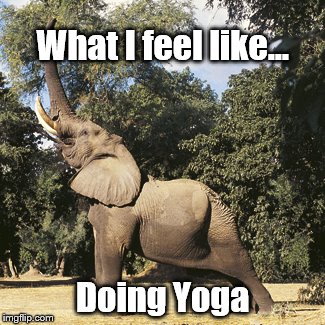 I’ve only been practicing yoga consistently for about 6 months. I’ve noticed changes both physically and mentally in ways that are more noticeable than any other period of my life. I have muscles I didn’t know were hiding under my skin. Sometimes I make Harrison feel my biceps- just for fun. I feel strong in my body like I never have, and I like that. I have a better relationship with sleep than I used to. I still fight insomnia sometimes, but far less often than I used to.

The mental changes I’ve noticed have been far more surprising than the physical mostly because of what I said before about scoffing at the uplifting memes. I still do that, and I probably will for a long time, maybe forever. I make unfair assumptions, I’m cranky sometimes, I’m cautious and sometimes suspicious of most people. I’ve been described as negative and misanthropic (mostly by people that don’t know me very well or as a joke, so I try not to let that get to me). I know people who are more comfortable being unhappy than happy, don’t do anything to help themselves, and subsequently make everyone around them miserable. I do not want to be that person. I want to be someone who respects others, treats people with kindness, and has the capacity for compassion and empathy. I am becoming the person I want to be – day by day, class by class. What I’ve realized in the last few months is that being nice does doesn’t mean that you can’t have boundaries, and being open is not same thing as being naïve. Being happy does not mean you can’t take time to recognize the unhappy feelings. Being positive does not mean that you can’t also be realistic and logical. Yoga has allowed me a safe environment to work through my personal shit in a way that I completely doubted could be effective for me. What I’m saying is that all the angry and sad people should probably try yoga.

Also, my sister (she plays soccer) said to me, “I’m running the whole time when I play soccer. You’re just standing.” I’ll let you know what happens when I get her to a class. It’s going to be AWESOME.