I celebrated my 29th birthday last weekend. I’ve been saying I’m almost 30 for a while, so I guess that’s official now. I don’t typically make goals because it typically means disappointment for me due to my frequent inability to overcome the mountainous urge to sit on my couch and watch television. However, I’ve been thinking about things that I want to accomplish or turn into good habits, mostly because I want keep myself healthy and relatively happy.

I’ve made a reading goal the last two years, and I’ve only gotten about halfway there. The goals I set for myself weren’t even what one might call a “stretch goal.” They were perfectly attainable. I like watching TV a lot, so I get distracted. I usually start the year strong, and then I basically stop reading things around April. I’m not sure of the reason, but it has happened this way the last two years. Right around December, I start feeling the sharp pangs of guilt, so I try to squeeze in one last book. I’m currently trying to finish Sounds Like Me by Sara Bareilles (I love her) by the end of the year. Next year, I only want to get to one damn book a month. It shouldn’t be that fucking hard! That was me getting frustrated with myself. Sorry.

I also really want to know what yoga instructors mean by, “Find the intention in your practice.” I’ve never understood that, mostly because I have a hard time living outside of reality. My actual reality is that whenever I overcome the mountain that is my own laziness to do yoga (or anything physically good for me), I spend an unfortunate amount of time painfully struggling to hold poses (it’s harder for us non-tiny women) while trying to figure out why I’m doing it to begin with because there is apparently some ethereal purpose that I have not yet been made aware of. Nonetheless, I do believe there are health benefits that I would probably feel if I just did it more often. 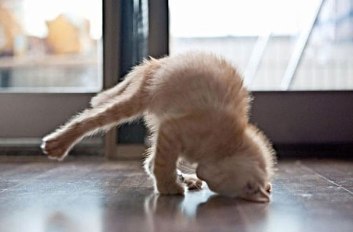 Last week, I barely slept at all for three days. It was miserable. I missed some work because of it. I don’t remember a time in my life that sleep and I had a healthy relationship. Even as a kid, I remember a recurring nightmare that caused me to be afraid to sleep. It’s a little different now. Normal adult things keep me awake. In addition to that, I basically want to fix the world’s problems, even though I know I can’t. Since my sleepless 72-hour stretch, I’ve started to turn my phone off at least an hour before bed, and there has been a shocking difference in my stress level at night. I love Facebook, Twitter, Instagram, and all of that nonsense just as much as anyone else, but for people like me, having a flow of the world’s awful news flying at me right before I’m supposed rest my mind just doesn’t work.

Here’s to a healthy and happy 29th year!