I gave up meat in August. Okay, I’m flexible with fish, because I might murder people if I can’t eat sushi every once in a while. I’m trying to keep the seafood to a minimum, though.

Harrison and I have gone to New York for Christmas to visit his family for the last 7 years, and this year I was a little concerned because of my new dietary choices. There are already a lot of dietary needs in Harrison’s family, most of which involve the Paleo diet, which is very heavy on the meat, and they hold strong opinions about a meat-free diet. On Thanksgiving, we called his parents, and Harrison planted the seed that I had recently given up meat entirely, so there would be no surprises over Christmas. His dad’s response was, “No protein!?!?!!?!?” I rolled my eyes.

The first day we were in New York, Harrison’s dad grabbed a handful of bacon and crumbled it into everything he made for breakfast. In an effort to not be rude or a pain in the ass, I spent breakfast trying to eat around the tiny pieces of bacon that had been added to my food. Harrison’s mom also made a pasta sauce that included chicken bouillon cubes. I know that none of this was malicious. They’ve never had to think about these things. They had made a lot of accommodations for me, which I greatly appreciated. They just missed a few details.

When Harrison and I went into the city for a couple of days, I was fairly adamant that we ate at vegetarian and vegan restaurants whenever possible. That ended up being pretty easy, and we ate some great food, so I thought I would share for my vegetarian and vegan friends.

I stumbled upon this place semi-accidentally after we spent a few hours at The Met. I got on Yelp to see what was nearby and saw this place described as Vegan/Vegetarian. Hooray! Harrison and I shared the Cajun Seitan Sandwich. Delicious! They also serve fresh juices (“Elixirs”) that are packed with nutrition and very tasty. I drank the Berry Harvest elixir, and Harrison drank the Flu Fighter elixir.

It was definitely a great find!

Vegan sushi. Who knew? Oh my goodness. I loved this place so much. I think Harrison and I got a little too excited when we were ordering because everything looked so good. We had to reign ourselves in a bit. I highly recommend the Nutty Buddy and the Spicy Mang roll.

Who doesn’t love a good burger? I have had some garbage veggie burgers since I stopped eating meat. This place is so great, and it’s really easy on the wallet. Only $6 for a burger, and they are super tasty. They can also make it vegan upon request. The Broccoli Rabe was also delicious.

This was our splurge meal. Whenever Harrison and I travel, we are fairly frugal when it comes to meals, but we might find one nice place and spend a little more on one nice meal. Modern Love was recommended by a friend who has been a vegetarian for about 12 years. We got the Tempeh Stuffed Avocado as an app. Harrison had the Bacon Cheeseburger complete with tempeh bacon, cashew cheese, and a seitan patty. I had the Mac ‘n Shews- vegan mac ‘n cheese with tasty cashew cheese, breaded tofu on the top, and some kale and cauliflower included in the dish. I think Harrison was a little skeptical, but we both left very full and very happy. 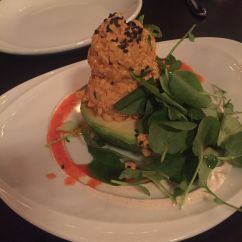 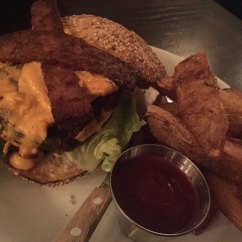 Harrison and I stopped into Other Half last year when we were visiting over Christmas on a recommendation from a co-worker. Last year, it was a tiny but very impressive place. Excellent beer. This year, we were happy to see they had taken over the space next door. They had way more space and they were PACKED. And the beer is still just as good!

Harrison and I go to the Peekskill Brewery every time we’re in New York visiting his family. We LOVE this place. Their beer is some of the best we’ve had outside of Colorado, and they also have great food. If you’re visiting the city, you’ll have to take a train ride up to Peekskill to try this place, but it’s definitely worth the trip.

5 thoughts on “Meat free in NYC”